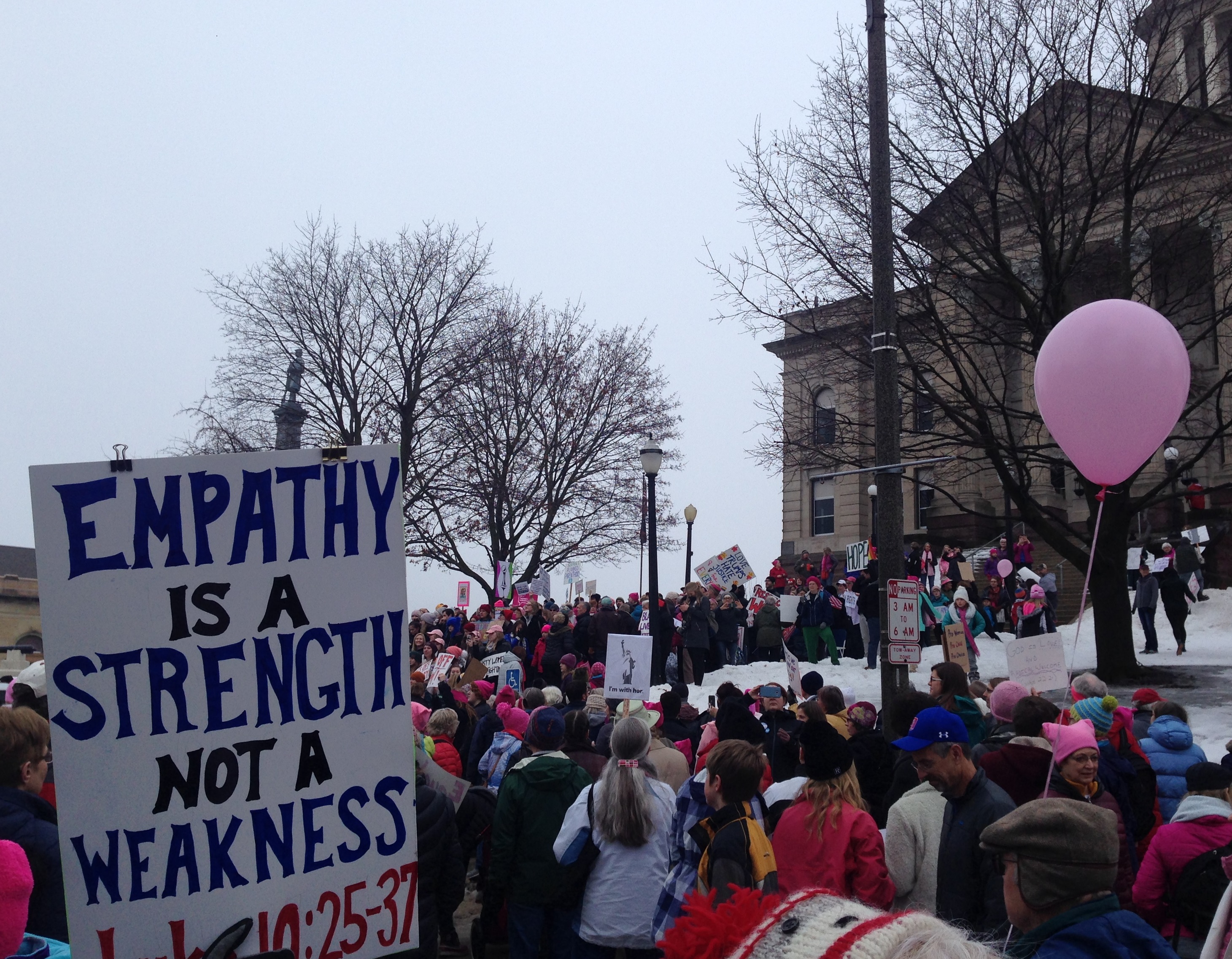 It felt good to be out on our little town’s main street with a sign in my hand again, surrounded by my friends and students and – despite the chilly fog – determination and hope. As I describe in my forthcoming book, The Hands-On Life: How to Wake Yourself Up and Save The World, this is the town that taught me how to get out there and ask, peacefully, for the rights my Constitution guarantees.  Since I’ve lived here, I’ve participated in public gatherings and city-council meetings connected to anti-frac-sand-mining work, bipartisan work to strengthen our local economy in the wake of the global financial crisis, and an interfaith march in support of the victims of the Postville raid. Retreating from the public sphere into our private homes and “letting ‘them’ take care of it” means ceding the power of the people to corporations and the lobbyists and politicians they’ve bought, all of whom will assume, unless they hear otherwise, that their actions are OK with us. As the great political philosopher Hannah Arendt (1906-1975) wrote, “Politics is not like the nursery; in politics obedience and support are the same.”

Organizers of our local march told me they hoped for 50 people, maybe 100.  Instead, more than a thousand showed up, echoing the pattern of women’s marches across the country: turnout was enormous.  But the Women’s March was, and is, not only about women.  And it’s not the “radical” movement that those who think they’re unaffected by our concerns, or those who are unused to exercising their rights in public, like to assume.  Such movements seldom are.  In that crowd in our town were people of all ages, genders, races, and walks of life: men and women and transgender people and everyone from infants to 80-year-olds, including distinguished emerita colleagues who have inspired me throughout my entire career with their dignity and grace, teachers and ministers and small business owners and waitresses and entrepreneurs and farmers and doctors and nurses and biologists and ministers and many of my own dear students. And many, many, many little girls. (What will our world look like by the time they’re my age? What am I doing to make it a better one? These are the unignorable questions for all of us now.)  People of many faiths were there, including fellow Christians who, like me, have taken the Matthew 25 pledge.  We are concerned about a network of interconnected issues, including health care, fair wages, violence, bigotry, the climate degradation that damages all our lives, and the shameful misogyny that, like so many other forms of shameful behavior being demonstrated right now, we are determined never to help to normalize. And we are trying to help our fellow Americans see that interconnection of all those things. This is not normal, y’all.  And it’s not okay.

When we look at our national political stage at this historical moment, we’re stunned at the Alice-in-Wonderland-ish upending of the standards of decency, interpersonal respect, factuality, and legality that we the people uphold in our lives every day. We object to the lack of character and judgment signaled by these. We worry about this. We wonder why such glaring contradictions as this seem not to bother anyone in power. We would laugh in disbelief at this and this if they did not make us so sad. We grieve at those who cling to mockery of “the left” in defiance of newly vigorous realities that should bother everyone: the glorification of robber-baron arrogance, narcissism, and greed; the ignorance of the Constitution and the rights it gives, including peaceful protest and the right to vote for which our ancestresses fought so hard; the harassment and access-limitation of that democratic necessity, a free press; the willful contempt for learning, for science, for intellectual honesty, and for fact, which can never be erased by any “post-truth” cliché; the social, economic, educational, and historical naivete and ignorance; and the climate-science-denial and contravention of fossil-fuel reality more unaffordable for our planet, as we’ve passed 400 ppm, than it’s ever been. In so many ways, the president’s house is empty.

So we came out on the day of the Women’s March to stand up for the country – and the standards of normality and decency – we love.  For ourselves as women, and for everyone.  Nobody knows what’s ahead. But out there on that foggy, chilly day, talking to one another and hugging friends found in the crowd and meeting strangers and replanting our feet on our common ground, we were reminded that our common life, and our voices, and our art, and our truth, and our care for one another and our planet, are the sources of our power as citizens.  This is what democracy looks like. 6 thoughts on “The Women’s March: here, there, and everywhere.”