Today in Internet horror: rare Argentine dolphin dies after being passed around by a selfie-taking crowd.

Sticky and sandy and dry and eager, eager, seeking hands, all over that moist skin, sucking its moisture away in curiosity or excitement or wonder or unexamined narcissistic need, suspending it out of the sea until it heats and dies, positioning and repositioning themselves on that slick gray body with phones angled just right, then abandoning that body once they’ve used it up.  Despite some question – maybe the dolphin was already dead? — that does appear to have been what happened here.

Touching things can kill them.  The oils and acids of human hands can break the mantle of moisture on a water animal’s skin or stain a painting with a touch that eats the paint.  A butterfly’s wings bristle with thousands of tiny feathers that even the most gentle fingertip can crush.  (It’s a terrible inverse of Hawthorne’s “Rappacini’s Daughter.”) And it’s not only our touch, it’s our sweat, our heat, our carbon-dioxide-pumping breath.  The heavily toured cave paintings of Lascaux are grown over with mold now.  To avoid a similar fate for the marvelous caves of Chauvet, a simulacrum of the whole cave — down to the 30,000-year-old bear skull  sitting on a rock, just where those other humans left it — will be built a few miles away for visitors.  (As filmed by Werner Herzog, the paintings are marked all through the cave by the same artist’s signature: a red handprint with a crooked little finger.)  Sadly, we’ve now got to ask whether Venice and the Sistine Chapel — just for instance — will survive all the love they get. 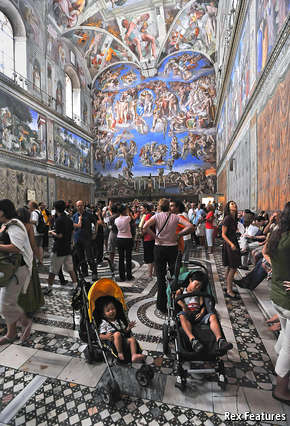 Yet as nature educators and Pope Francis remind us, we won’t love what we can’t put our hands on.  And if we can’t love it, we probably won’t feel the need to protect it, or to change our lives on account of it, which means we won’t really love it at all.  The word for the disciple usually known as “doubting Thomas,” who had to put his hands in the wounds to believe it was really Christ in front of him, can more accurately be translated as “touching Thomas.”  Like Mary and Martha begging Jesus to haul their brother’s body out of the tomb, or the woman “with the issue of blood” creeping up to grab his garment hem, touching Thomas shows us a stubborn human love built in bewilderment and demand for action and its flipside, a willingness to be convinced.  All that love begins with touch, just as teaching a child to love what we call nature begins with picking up the light body of a dead kildeer chick from the yard, showing her the light departed thing, flimsy as an eggshell: look, how fragile, how small. But how wonderful.*

But I don’t give selfie-takers a free pass.  Nor do I soft-pedal the way we wreck what we say we love by handling it to death, or the way our doing, handy-making, techy brains and toys have made our humanness a destructive force.  I’m not convinced that that desire to photograph — get this image in my phone! — can be totally unhooked from that furtive possessiveness that led Hitler to hide his stolen Renaissance paintings underground, or a Minnesota dentist to bag a “trophy.”  Even travel becomes about feeding the self this way, positioning it narcissistically against a backdrop of international images to prompt a chorus of “likes” on Facebook.

This January I walked again with study-abroad students through Venice and the Colosseum and Westminster Abbey and, yes, the Sistine Chapel.  Fighting for a place to stand in the shoulder-to-shoulder crowd, we turned in circles to read the story from top to bottom: God separates water from air, water threatens to drown humans trudging up from the flood with furniture and baskets and food piled on their heads.  Photography’s forbidden there.  But three teenage boys in tight jeans and extravagant sneakers – barely bothering to hide their giant Samsungs – were taking pictures anyway.  “This bitch spoiled my shot,” complained one, in Spanish he didn’t think I could understand.  Settling on a bench, they huddled to sort and post the best of the photos they’d just taken, downcast faces lit in Facebook blue, Michelangelo’s raging architectures of color all around, unseen.

The artist Annie Katsura Rollins talks about her fear that we’re losing a certain type of “hand-wisdom” if we only tap and swipe, never cut, mend, weave, make, or touch.  There has to be a human touch that’s different from the minimal glance it takes to activate a screen, that is life-affirming rather than death-dealing to us and to the human and nonhuman beings with whom we share this earth.  Figuring out where the line is – that’s our job.  And in pondering this, I’m left with a single image from Herzog’s dazzling film:  that red handprint with its humble broken finger — recognizable, in its insistence,  its repetition, its brokenness, its touch, as us.