Did I ever think I’d be writing the words, “My first novel is published today?” Not really. But I am. And here it is, from Bowen Press Books. 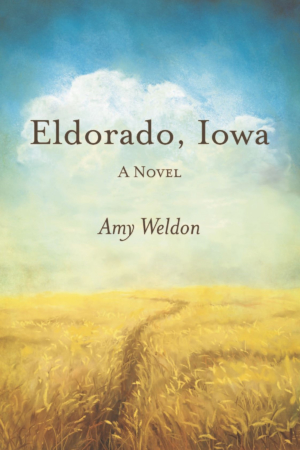 As a twenty-one-year-old dreaming of being a writer, I never could have imagined I’d be sitting here (in the British Library, no less!) marking this day. Nor could I have imagined the amount of work this would take, or the journey it would take me on, over a decade. Eldorado, Iowa (borrowed from the name of an actual small town near where I live) was sent out, revised, rejected, revised again, and then accepted (right after I told the story of its first round in my second book, The Writer’s Eye.) Here’s that story:

Images can arise from something remembered, or from some source that’s harder to name.  My first completed novel manuscript, Eldorado, Iowa, started in just this way. On an unseasonably warm afternoon – the last day of October 2008 – I was outside with my creative-nonfiction-writing students, on the lawn under the big cottonwood tree. They sat on the grass in small groups, reading each other’s drafts, and I strolled among them, answering questions and eavesdropping. I looked down at my own feet, brushing through the yellowing grass.  Suddenly – I don’t know how else to describe it – I blinked and saw them transformed.  In my mind’s eye, I looked down at the toes of high-topped, lace-up leather boots, peeking from under a long brown skirt that bent the grass sideways as it trailed the ground and tented gently outward with every step.  I had entered the body of some other woman, more than a hundred years ago, walking through the grass on a warm afternoon.  And – I knew from somewhere inside that body – this woman was pregnant.  What was her name? Sarah. Her name was Sarah.  What year was this? Sometime in the 1870s, when the Civil War and the idea of the frontier still felt raw to living people. Where was she? Iowa. Where had she come from? Alabama. Just like me.  And, like me, she gets a lot of her ideas about the world from books.

That image became the opening lines of my manuscript.

In 2012 – four years after that initial image-flash of a pregnant woman in a long dress, walking in the grass in my little Iowa frontier town – I finished my sixth draft of the novel and sent it to an editor I knew (let’s call her Anne.) I had published short stories and essays in journals but had never published a book.  Counting the fragmentary beginnings and scenes I’d been toying with since my senior year of college, Eldorado was my fourth distinct novel manuscript and the first one I had finished. I felt more attached to it than anything else I’d written, having invested more in it in terms of emotion, craft, and time than I ever thought possible. I liked and trusted Anne, and although I felt nervous about sending Eldorado out, I knew I had reached a point where I couldn’t do anything else with it. It was 286 pages long. And it was time to let it go.

Anne sent me back a thoughtful letter. She and her colleagues had read the manuscript and praised my prose style and sense of place, but they noted “insufficient narrative momentum,” meaning “not enough happens.” (This was my biggest challenge as a fiction writer: keeping a plot moving forward and the stakes high without getting lulled into flashbacks, descriptions, and other backwaters of distraction from the story, kind of like I’ve just done with this parenthesis.)  I accepted this critique, with that same sense of relieved-yet-stomach-sinking feeling I always feel when someone has identified a flaw in my writing I’d hoped was invisible. I revised a couple more times. I added a villain – automatic stakes-raiser, right? – and rearranged and fleshed out some other scenes.  I cut out a section of the novel set in modern times, as they’d suggested. I reread the whole thing aloud. And then I sent it off again.

On the morning of my thirty-eighth birthday, radiant with the light of early fall, a package thumped onto my porch: my manuscript was back, with a letter from Anne.  Her verdict, gently phrased, was that she wouldn’t be publishing it. I remember a cold crater opening in my chest, its edges crumbling in as it expanded out, and out. I cried. Eventually I chivvied myself back up to cruising speed: be a professional, you’ve been rejected before. Yes, but never for a project that meant so much, on which I had worked so hard, for which I had what I thought were such well-founded hopes.  You’ll write other novels. Yes, but I had given this one my heart, and what I still think is some of my best writing.  (James Salter felt the same way about his classic novel Light Years: “Some things I love in [this book],” he wrote, “I love as one loves a woman.”)  Now I had a broken heart, a too-familiar way of talking about the pain of the fact that reality has denied you your vision of a state of being that, if achieved, could change your life for good.

Of course I kept on teaching, writing (mostly nonfiction that would become my book The Hands-On Life), and trying not to let the downward suck of that grief – and it was grief – draw me in. I couldn’t look directly at that cold crater inside, or at the mute, innocent manuscript in its yellow padded envelope with the publisher’s logo. I knew, and I still know, that the book has other flaws, that Anne’s verdict was not unfair, that Anne is a good person and a fair reader. (Which she is.) Each time I think I’ll go back to it and take another look, another book comes along: first The Hands-On Life, then this one you’re reading, and now also a new novel manuscript with which I am in love, and on which I am working with the techniques and overall vision of time and structure Eldorado, Iowa taught me.  In my head I still feel Sarah and the other characters walking around their little town, tugging like children at the edges of my attention: What about us? You haven’t forgotten us? No. No, I haven’t. And I won’t.

My students’ eyes widen when I tell them this story: you, our teacher, also get rejected? Yep. You did all that work for nothing? Not for nothing, since nothing is ever wasted when you’re a writer. Experiences and emotions silt down through the soil of your self into the vast, never-fully-plumbed aquifer of words and images and impulses inside you. Each draft gets you closer to the next one, even if you are starting from scratch each time.  Even if you (meaning me) write 150 pages of a novel and then your workshop leader and workshop-mates suggest to you (accurately) that your main character is too passive to carry the novel and that another character might actually be the real protagonist and then you rewrite all 150 pages with a new character at great and excited speed only to be interrupted by the image of a woman walking through the grass that becomes a whole new novel that takes over your imagination and your life, nothing has been wasted there.  Rejection and revision are facts of life that experience and time can never remove but definitely do soften and teach you about.  Being told no, thanks anyway by an editor is not and will never be easy, but it doesn’t flatten me anymore.  Despite what our youth-obsessed culture would like us to believe, being more than forty years old, with a fully functioning frontal lobe, is a good thing.

But, as you can see, this long ramshackle process of writerly growth takes time. It takes many thousands of pages – drafts, notebooks, journals – written over many days, and it takes multiple drafts of revisions of most of those pages.  It takes the ability to feel and accept emotions without being derailed by them. And, as Sonya Chung says, it takes a very high tolerance for uncertainty.  If you do not have this tolerance for uncertainty, and you do not hang in there with this process, for however long it takes, usually without much (or any) signs of external reward, you will probably not be able to live as a writer. Because, if you are a writer, this is just how things are.  Underneath it all, though, is another truth: not writing is worse. The uncertainty, the work, the fretting, the neurosis – these are, to borrow a phrase from James Baldwin, the price of the ticket to doing this thing we love to do.  Victorian art critic John Ruskin observed, “The highest reward for a man’s toil is not what he gets for it, but what he becomes by it.” I think he’s right about that.

Just about every novelist I know has a story like mine.  It’s very common to write much more than you publish, and to write multiple novel manuscripts (whole ones or pieces) before you write one that sells. Patrick Hicks, author of the novel The Commandant of Lubizec (2014), the story collection The Collector of Names (2015), and three poetry collections,  Adoptable (2014), This London (2010), and Finding the Gossamer (2009), puts it this way: “When people congratulate me on publishing my first novel, I smile, say thank you, and think about the five novels I wrote before this one.  This is novel number six. It’s just the first one that got published.”

The reality is this: love of writing, not the desire to Be Published, has got to be your reason for writing.  Doing this work will challenge and excite you and reinvent your inner life and break your heart. You have to love walking the path – you can’t set out with your eyes fixed only on the goal up ahead, not on the ground under your feet, the daily work, since that goal might never happen. You will see writing published that breaks every Law of Good Writing I’ve described, and then some. You will see your work rejected for reasons and in ways that seem to you misguided at best or unprofessional at worst.  But you have to keep at it.  My former teacher, the late, great Barry Hannah, said, “But I’ll say now, having been close or on the deathbed briefly, THAT WE’RE ALL BUSY DYING.  Cut the crap, get to work. But not unless you love writing deeply, feel the angst of vacuum without it.” Ultimately, if you are making art, you have to be content with a certain degree of mystery.

I’m grateful to the mysteries that have led me to this day, and I’m eager to see where they lead me next.

2 thoughts on “My first novel: welcome to the world.”