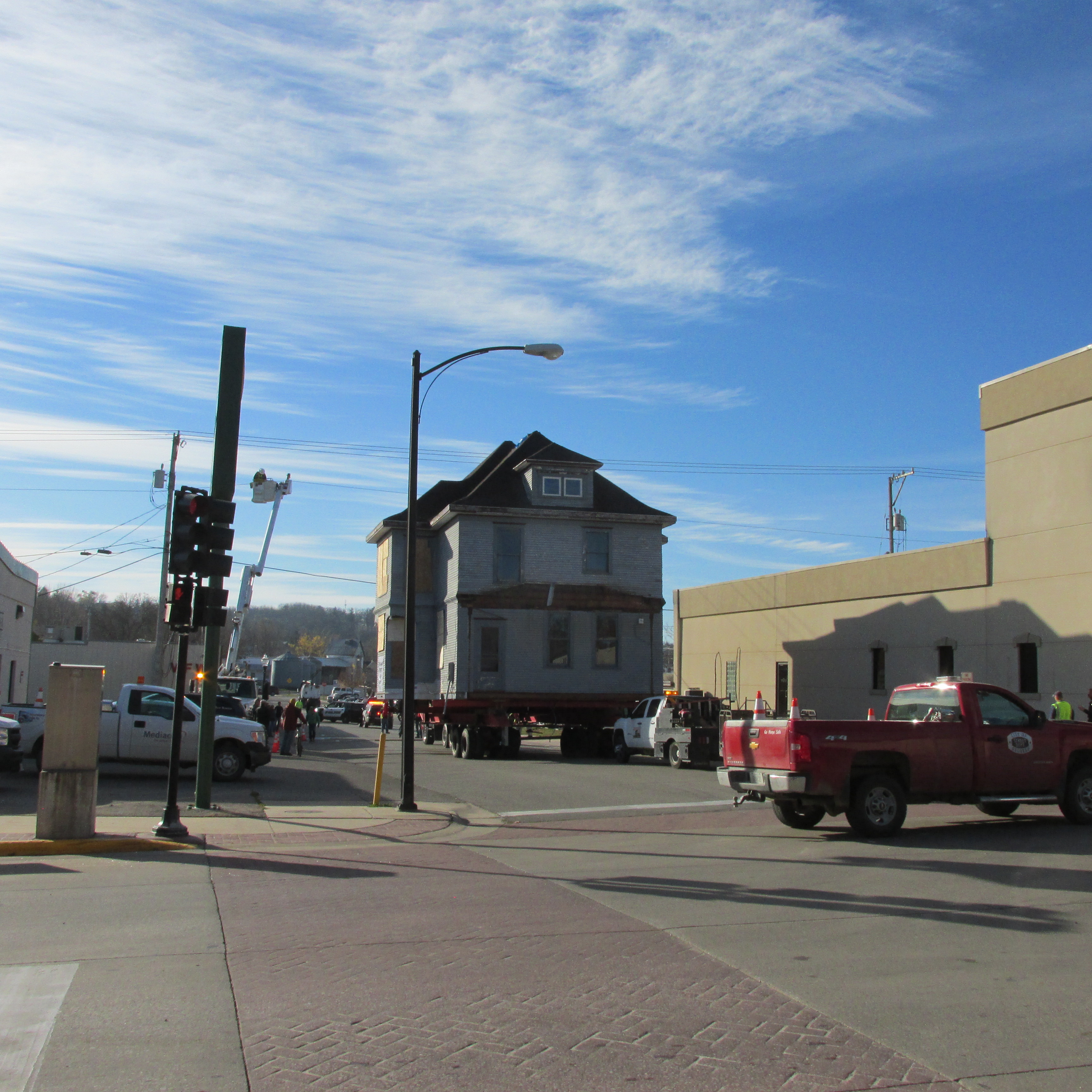 On the morning of November 9, 2016, I walked out of my front door into a world I wasn’t sure I’d recognize.  It was the warmest November ever, but with just enough nip to the air to remind us it was still November after all. The sky was creamy blue, the air exhilarating, with a tinge of exhaust and gasoline.  A neighbor was walking down the sidewalk and we hugged, wordlessly, shaking our heads.  But then we turned and continued up the street to where a tangle of police cars and power trucks surrounded a giant semi, chugging under its load.  At last, the house was on the move.

“The house” was a blue-gray, three-story Victorian with high ceilings and elegant wooden trim that had sat on its corner since nobody knew when.  Recently purchased by our hometown bank – the same bank whose vice-president, grandson of its founder, can be seen out back cutting the grass on summer afternoons – the house had been sold to a young woman with a young family who’s moving it across town to restore, across the street from her own parents’ house. The windows had been boarded, the walls plastered with happy paper signs (Starting a new life!), the whole structure jacked up and supported by two giant steel beams.

And now, as the whole town had been anticipating, the big house was underway at last.  People gathered across the street, snapping pictures, as the truck inched into the street and the big house came with it.  Out over the curb, then – with infinite slowness – up to the intersection and a turn onto our main street, past the hair salon and the bike shop, the house moved on.  Past the bank employees standing on the corner in their suits and ties and nametags, past the bar and the music shop, past the chiropractor’s office and the Mexican restaurant whose owners’ son was one of my students on my first study-abroad trip, tracking Mary Shelley and Lord Byron and John Keats through England and Geneva and Italy – with notebook and pen in hand, eyes wide open in wonder, he was the last student out of each museum we visited.  Past them all the big house sailed with the eerie wondrous majesty of a ship, its brown shingled roof-peaks floating higher than the roofs of the earthbound buildings on either side.  An elementary school teacher had walked her class up a couple blocks to watch; the children huddled on the corner, pointing and exclaiming, faces lifted to the sky.  In the face of such a sight even the familiar becomes strange, even magical.  What will their dreams be like, after today?

Like courtiers, the linemen in their ladder trucks surrounded the house on its Elizabethan progress, lifting the power lines out of its way.  Police officers went ahead to make sure the way was clear and signaled traffic along the route the house had just recently traveled, getting the day back to normal even as the great thing eased away from where it had always stood.  I found myself next to the bank’s vice president (the one who cuts the grass) and shook his hand.  Thank you, I blurted, for giving us something to come together around as a community today.  Until I said it I hadn’t realized how deeply I felt it. Politics is not a nursery; Hannah Arendt is right about that.  There will be disagreement.  But there need not be — must not be –vitriol, spitefulness, hate.

My walk to campus that morning took me longer than usual because I kept stopping to talk, to hug, to simply stand with people I knew.  All day long students pressed close to colleagues and to me, nervous and on the verge of tears, all of us semi-wordless, pleading the same silent thing: Be with me. Help me feel by your presence that we will be okay somehow. There were tears. There were meaningful looks, there were pats on the shoulder as we passed wordlessly in the hall.  I felt that power of connection like oxygen: we need other people in the flesh, we need the presence of and in the living world.  Not for the first time I gave thanks that I’m a teacher in this place, with these students.

After dark that night my old cat circled my feet as I entered the usual evening laptop-gyre of Email and Commentary.  I looked down at him.  This is my present moment, in which he is here with me. He won’t always be.  What am I ignoring, locked into pseudo-conversation with a computer?  Life is very long. So is the field of action; so is the necessity of conserving and sustaining energy, especially from this day forward.  More and more these days, I am realizing that for me, social media drains that energy away. This is my one wild and precious life. How am I spending it, on what good, for what purpose? What, in every way that matters, am I actually doing?  Being out on that street in my town, talking to my neighbors, watching that house float away, had felt so good, especially after the burning-eyed incredulity of 3 a.m.  What place was this no-place of the screen?  And would it really nurture real work?  What was I now being asked to understand? What if the thing that we need — at every level, especially now — is community?  What if that is the place where the real work of change begins?

The following day, after more than one conversation with sad and anxious people, especially students, most of whom mentioned Facebook as a deepener of that mood, I decided to let myself say this: it’s OK to release yourself from the notion that posting on / “correcting” other people’s arguments on / ceaselessly monitoring social media is something you have to do.  Sure, social media is a great tool.  It can be vital to represent your point of view, to be heard, to gather your community, to document the ugliness breaking out all over. You might be saying something another person really needs to hear.  You might be finding community you need, especially if you are one of the many people cast into danger, in this post-election world, because of your identity.  I totally get that.  I don’t want to minimize the lifeline and the tool for activism social media can be.  But it can also so easily swallow us, churning us around in breathless, paralyzing spirals of anxiety.  Many of the most powerful community leaders I know (like those in our anti-frac-sand mining work) spend little to no time on social media.  It is not for everyone.  But action can be.

In these days I am finding that doing something breaks up dark, frozen moods, even a little.  There’s a lot to do.  Write or create in a forum not limited to 140 characters or bright images framed by that corporate border of blue and white — a medium, as Zadie Smith reminds us, “designed by a Harvard sophomore with a Harvard sophomore’s preoccupations.”  Write something that can be read and lingered on, thought about, returned to, in a longer-form article, a book, a magazine.  Talk to somebody, hug them, pat them on the shoulder as you walk past and see that sad look in their eyes: the simple power of this, on the day after the election, was stunning.  Sit down with a group of students who want to talk.  Get a group of people together on the courthouse steps.  Make a donation to a good charity, or volunteer.   Reach out through your church or other organizations to people in need, whatever that looks like; there are so many forms of need out there, and so many churches doing amazing things nobody knows about.  Go to your county Board of Supervisors meetings.  Go to Standing Rock or give money to people who are going.  Plant a tree.  Take a walk. Dig in some leaves to your vegetable patch to get it ready to grow you more food next year.  Take care of your family, your friends, your pets.  If social media is stressing you out rather than actually informing and engaging you – as the best reporting and media can do – you shouldn’t feel guilty about turning it off.  Especially since doing so might enable you to turn more fully toward the world beyond the screen.

One way or another, that living world will move forward like that house down the street. And it will do so best if surrounded by the team of all of us, out there, watching and engaging with it on its way and clearing the obstacles from its path, not sequestered away in what can so quickly become internet silos, hammering away at our keyboards as our blood pressures and anxiety levels spike into the red zone of despair.  That is what our living world cannot afford.

2 thoughts on “Moving the house.”