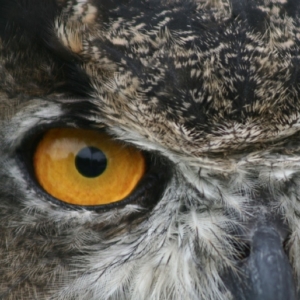 I’m so honored that Orion Magazine has featured my essay “Gaze Upon This World,” which appeared in its Spring 2018 issue, in its feature “Father’s Day: Top Five Articles About Dads.” The piece is print-only, but here’s an excerpt from the beginning:

I’m biking through the dark in the smoky chill of October. Overhead, a great horned owl gathers itself and lands on a snag, its swiveling, feather-crowned head wider than my palm. I stop the bike and stand still. For a while, we watch each other. Then, hearing some creaturely snap in the brush, it ungrips its branch and springs into the dark.

Wonder stirs in me and sharpens to delight. When I get home, I’ll call Daddy and tell him I saw . . .

Three weeks ago today and it still isn’t real.

The fierce knuckly hands almost gentle in their letting go, the big thing taking to the night as quiet as a sigh—

One breath. And then he’s gone.

I see the wild world because my father taught me all my life to look at it. The wrinkle of snake-back where I’m just about to put my foot. Turkeys stalking in a cut-over cornfield. The young bobcat dashing across the road. Bald eagles wheeling over the Upper Iowa River and the college where I teach. Spotting wildlife became a game: “Buzzard or hawk?” he’d ask, pointing at the sky. Driving the two-lane roads near our farm at dusk, I’d test him back: “Might be a deer up there,” I’d say, “you better slow down.” When, a hundred yards later, the deer flashed through the headlights, he’d sigh. “You have the best wildlife eyes on Earth,” he marveled. “If you don’t see it, it isn’t there.”

My wildlife-spotting habit follows me everywhere I go, and by now, everywhere I go could mean Alabama, Rome, Florence, or London. One January, three students and I were trudging up Fleet Street at dusk, the dome of St. Paul’s Cathedral glowing in the sky. In the alley to Samuel Johnson’s house, up a ramp of rain-shined cobblestones, a dark shape flickered. “I’ll be damned!” I exclaimed. It was a fox, white-tipped brush aloft, trotting away on his narrow paws. He glanced back, looked me in the eye, then vanished. Where’d he gone to earth? Marvelously, nowhere I could see.

Even when I can’t see animals, I need to know they’re there. Animals are the bright through-line of my life in the world; they have a non-human-baggage-laden way of being that I worry much less about improperly theorizing or, even worse, romanticizing than I used to, despite well-founded questions of animal consciousness and selfhood. Our world doesn’t need more theories. Our world needs love, and the clear sight and conviction of which love makes us capable. The grief-lit questions of the Anthropocene are loose among us right now—who’ll carry on what we love? Who’ll protect the dying, speak up for the vanishing, bear witness and struggle and mourn?

My father’s dead. And now these questions slice into me, and twist. Who will know the stories he knows, stop to marvel at a tree full of winter birds, speak with dignity in a world that shouts? What will I keep doing with the gift he gave me: a writer’s first necessity, a keen and rapturous attention to the living world? To whom will I tell what I see?