Excerpt from Ch. 2 of Advanced Fiction Writing: A Writer’s Guide and Anthology (forthcoming in 2023 from Bloomsbury Academic)

Getting It Down: Writerly Self-Organizing, From Mind to Page

“So long as I remain alive and well I shall continue to feel strongly about prose style, to love the surface of the earth, and to take pleasure in solid objects and scraps of useless information.” – George Orwell 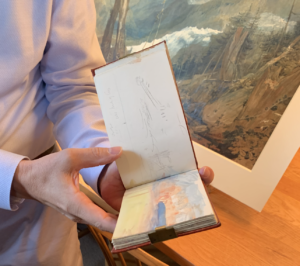 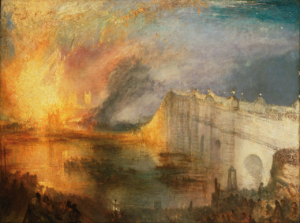 Left: Prof. Tim Barringer holding a watercolor sketchbook that belonged to the British painter J.M.W. Turner (1775-1851) in front of the Turner watercolor “Mer de Glace, in the Valley of Chaumoni, Switzerland” (1803) at the Yale Center for British Art; according to Prof. Barringer, this sketchbook is “the only one of its kind outside the British national collections” (July 2019, photo by me). Right: Turner’s “The Burning of the Houses of Parliament” (1834), via wikiart.org.

The room hummed with excitement as we gathered around a table spread with prints and engravings in the Yale Center for British Art.  On the table was a small red leather notebook, about four inches high and eight inches long, that once belonged to the British painter Joseph Mallard William Turner (1775-1851). Turner filled giant canvases with light and water: he loved ships and skies and stormy seas.  Yet those tremendous scenes began in this little book. Each page glowed with a miniature watercolor sky, a quick bold line with washes of color above and below. Wow, I thought, Turner did the same thing I do: grab a notebook to grab that quick line, that initial gestural impulse within which the whole work of art is curled, waiting for the light of attention to lift it into bloom.

We may wonder about the purpose of notebooks and handwriting (so analog!) in our digital age. Mike Leigh’s 2014 film “Mr. Turner” depicts the old painter in a photography studio, wary of this new medium that could make painting – even seeing and remembering – obsolete. Yet even alongside the ever-more-visual torrent of social media, notebooks survive. I think that’s because notebooks offer artists and writers something screens don’t: the kind of “friction” Sonya Chung mentioned back in Chapter One. Energy and life are sparked by a human being recording an impulse that has sprung to life in some mysterious, marvelous “friction” between the eye and the world.  That kind of motion and energy need a private place in which to grow. Writers nurture habits of notebooking, journaling, and image-capturing for just that reason.

Yet friction and privacy – which artists, and humans, need – are the very things screens are designed to reduce.  And even as writers digest the Internet in fictional form (see Ch. 3), we can’t afford to lose a basic skepticism about the kind of thinking its corporate imperatives and structures ask us for, and the kind of selves we become as a result.

Screens and the Artist’s Self

First, let’s start with devices. “It’s more efficient,” students say, “to take notes on my phone/tablet/laptop than on paper.”  Well, maybe. But let’s think about what efficiency actually means. I’ve been teaching college students since 1998 – the dawn of personal cellphones and something called the World Wide Web – so I’ve seen changes, in them and me. Neuroscientists know that a little friction and challenge literally activate the brain. Yet as as screen-devices take over the daily work of remembering, wayfinding, and decision-making, our capacity to engage with life in the world and words on the page has declined. Efficiency is a good goal for engineers and CEOs, who must design functional, profitable machines that do not call attention to themselves – that, literally, work smoothly. It’s not always a good thing for artists, whose “product” depends on serendipity, texture, impulse, accident, observation, and so many other things born of the inevitable friction between the self and the world, churning up its “results” in private, in its own good time.  Art jumps up into our attention from what isn’t smooth or predictable: what stands out, what makes us pause and look, what makes us think.

Artists have another big reason to be skeptical of screenish “efficiency:” in smoothing your private self into that engineered, professional shape, screens also tilt it toward the public gaze, which can kill a work of art at birth. “Rather murder an infant in its cradle,” says the great poet and engraver William Blake (1757-1827), “than nurse unacted desires.” Yet social media (waiting one click away on your device) can breed a weird, stealthy habit of self-surveillance-in-advance, a low anxious hum that can “murder” any “unacted desires” or thoughts or words before they’ve ever had a chance to seek the light. What will my friends think? can become better not post it, then better not write it, then – as George Orwell dismally forecast in Nineteen Eighty-four – better not think it at all.

To be sure, a writer can mindfully deploy any form – including a smartphone – to make something new. Lauren Elkin’s No. 91/92: A Diary of a Year on the Bus (2021) is composed of short meditations written on her phone as she travels through Paris each day – a style of direct observation pioneered by the French surrealist Georges Perec (1936-1982.) (For more about Perec, including some writing exercises he inspires, see my book The Writer’s Eye.) Yet let’s think about that mindful part: for most of us in 2021, it’s a notebook, not a smartphone, that will awaken and defamiliarize our perceptions enough (see Ch. 3) to be of best creative use, because the form of the smartphone itself comes pre-loaded with so many habits and assumptions that are designed to profit its makers – not us.

Social media’s business model relies directly on a constant stream of your “content” and attention, regardless of how providing that “content” (almost always for free) actually affects your work and your brain. Consider: when should you post about your new project? What if exposing your work too early can sap it of some energy it needs to grow in private? Virginia Woolf, in her journals, worried about “talking the book out,” diffusing the energy of the images coming together in her mind by telling other people about them too soon.  My favorite director, Federico Fellini (1920-1993), felt a similar horror: “I think talking about the film before you do it weakens it, destroys it,” he said. “The energy goes into the talking. Also, I have to be free to change.” Others (including me) feel the same. “I believe that creative people need to keep a certain area of their brain completely private,” writes Fiona Pitt-Kethley, artist, satirist, and English teacher to the Sex Pistols. “I think of the psyche or inner daemon as something like the air in a rubber ball. Dissect too much and all the bounce might go.” Writer Kristen Roupenian describes this feeling: “By preserving a private space inside me, one that was safe from other people’s observations and judgment, [reading] preserved the part of me that knew I existed even without other people around,” she writes:

“Eventually, like a caver navigating through a single, narrow tunnel, I was able to move from that one small opening into other, larger caverns: this is what makes me feel good, this is what makes me happy, this is what matters to me, these are my values, this is who I am. By building a self that I knew could exist apart from other people, that was safe from them, whether they approved of me or not—and by allowing them, too, to preserve parts of themselves that I was not allowed to judge—I became capable of creating something of value that could be shared between us: a space where art, and love, could live.”

If we are always performing our selves for social media, how much energy are we reserving for our real lives – as artists and people?

One last thing: being a writer, and keeping a notebook, is about noticing, yet a life online desensitizes us with a stream of images that, paradoxically, can both jazz us up anxiously and make us feel numb, diverting and diffusing energy that could otherwise go into our work. The philosopher Soren Kierkegaard (1813-1855) wrote that, “If I were to wish for something, I would wish not for wealth or power but for the passion of possibility, for the eye, eternally young, eternally ardent, that sees possibility everywhere.”  Such an eye is developed by noticing, and can be one of a writer’s best friends. Yet how many of us, eyes always on our phones, have such outward-looking, roving, “ardent” observing eyes anymore?

Evaluating how screens shape your writing may be difficult, but not impossible. It starts with knowing yourself as the artist and person you have the right to be – not just a monetizable “content creator” or unpaid provider of algorithmic fodder that can be used to sell you more things online. Around 2015, my creative writing students (including Reed Johnson, MD, in Ch. 8’s Student Career Studio) had a lively in-class debate about whether then-new Instagram could serve as a notebook. They decided not – precisely because of the public nature of the medium.  Student mindfulness about the Internet gives me hope, because increasingly I’m convinced that this thing can’t just be fixed. Someone under 30 – maybe someone not yet born – will have to invent a whole new way of doing Internet for the next generations, and the legal structures and personal safeguards to go with it. To be good and safe, it probably can’t be free. But it can be better for humans, nonhumans, and the world we share than what we have.  And it will start with individual changes and consumer choices in our twenty-first-century economy, where, to paraphrase Jaron Lanier, data – and attention – are the new oil.

Until that brave new Internet arrives, every single one of us writers will need to cultivate mindful, conscious screen habits if we’re committed to a certain idea of artistic process, self-determination, privacy, and – as vexed as this term can be – independence in our work.  Of course, we can use computers or smartphones as tools, but let’s “think what we are doing,” in philosopher Hannah Arendt’s words.  Let’s think about what it really means to be a self – a real person, in control of your own ideas, energy, and presence in the world, as you have the right to be. This may start with developing a certain conscious philosophy of artistic process and resource- and idea-storage that works for you, based on how much interaction with screens you really want to have. Everyone’s may be different, as people have different lives and minds, and our needs and minds and lives change over time as well. But for me, now, everything comes down to the desire to

save my best energy for writing,

support an economy that prizes a livable world for humans and nonhumans over algorithms and profit,

and capture words and images before life’s inevitable busyness whisks them away,

I don’t want to look back with regret at what I haven’t done now,

and I’ve learned the hard way that without a mindful process,

I don’t write work I can be proud of over time.